So it's Saturday morning, I think to myself: I would be fun to play a few games on Skill Parade...

No big loss for that non registering Jumbo the elephant. It wasn't a winning combination anyway.

I open up the back of the game. Use a jumper on the rollover switch... No trip. The switch isn't the problem. I have a look at the Jumbo-2 switch stack on the trip bank. The problem becomes obvious.

Can you spot the broken blade?


Even worse. I can't seem to find the broken switch blade. It could be anywhere inside, possibly even causing a short circuit. Grrr. Eventually I did find it under the up kicker mechanism.

I took the time to measure the thickness of the broken blade: 0.01 inch. Pretty sure it should have been a 0.008 inch blade. It's way more flexible. And that's what I reinstalled anyway. 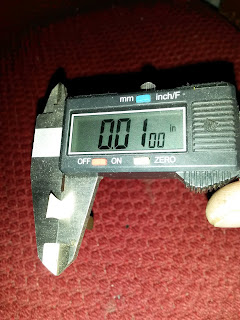 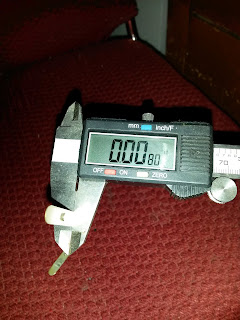 Fortunately, I have a donor Bally 2 in 1 pinball machine with a massive trip bank that has plenty of donor switch parts.

Two coinmen walk into a bar.
First one turns to the second and asks: Why so glum?
Secon answers: My machine was pilfered

He should have used a BINGO FRONT DOOR PROTECTOR GUARDS METAL

I really should get this game up and running. It's been in storage since July 2017 :-(
With Sun Valley, It's the only magic squares moving number game you can move all 25 numbers.

So it's a lazy Saturday morning.

...Have a coffee, putter around the basement...

I get the urge to play a few games on Sea Island.
For those unfamiliar with this Sea Island. It's the OG Chasing Bugs... Sea Island... we have a history.

I drop a dime. The magic screen starts rolling back to home position and unexpectedly stops midway... Poo :-(

I knew then what just happened. The gearbox for the magic screen motor stripped a gear.

My lazy Saturday morning had just turned into a repair project.


A small nylon gear absorbed the shock instead of the clutch unit. With catastrophic results. The G-4114 gear to be precise (it's also used in the ball lift gear motor) 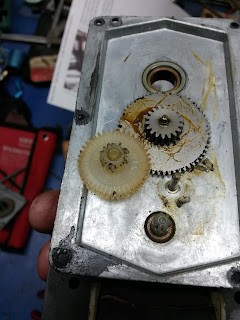 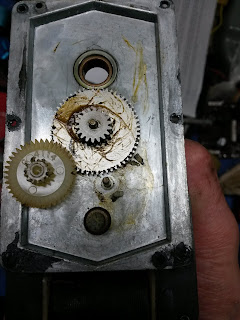 Fortunately I had a spare gearmotor assembly pilfered from another Sea Island. I was hoping to bring this second Sea Island back to life one day if I ever found a decent backglass for it, but it's missing more and more parts as the years go by.


I swapped out the whole gearmotor. I also took the time to disassemble the clutch. Degrease the parts, and re oil the leather washers.

I was working on my Golden Gate. The game has been languishing in the corner of the gameroom for so long it needed a overhaul before I could play it again... Stuck clutches, stepper units not resetting properly. I was play testing the machine with the backglass off. Changing burnt out bulbs and noticed the beautiful reflections it made on the playfield. Enjoy!

What do you get when you mix a Mystic Lines bingo machine with a Pachinko machine?

You get the Hustler!


Hustler was produced by Satomi Co. Ltd.
I wish I knew the year it was produced. I suspect 1976, since all the assemblies are labeled 7610 and 7609... I could be wrong, dates in these machines are usually expressed in Shōwa era (1976 should be indicated as "S51".
There is little information about these games but from what I read so far about Arrange Balls, they occupied the equivalent ecological niche in Japan as Bingo machines in most parts of Canada / USA. Back of the shop hush hush dubious legality. But then there's this video on Youtube clearly showing Arrange balls in a Smart Ball parlor. 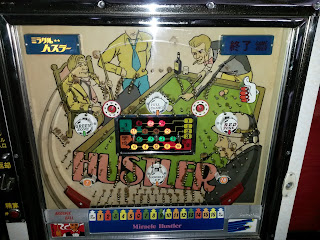 How do you play the Hustler?

16 balls are released to the ball shooting mechanism. Like an Arepachi (or unlike a traditional pachinko machine) the player cannot directly handle the balls. They can be seen behind a clear plastic chamber.

Balls land in pockets numbered 1 to 16, lighting corresponding numbers at the center of the backflash. Leftmost and rightmost alleys marked Re-play return balls to be shot again. Multiple balls can land in the same number pocket.

When all the balls have been played, inserting another token or pressing red button on the left side of the game pays out tokens*

Features are awarded when balls go through award pockets. These pockets do not hold the ball. The ball goes through, tripping a micro switch.

Instantly pays out 1 token and lights the double-up. Bottom 2 lines payout double indicated*. Does not apply to Red zone

Instantly pays out 1 token and lights the Double-up, Red Zone and Green Zone.

*This machine can pay out a maximum of five tokens (total) per play as indicated by the blue oval-ish label at the top of the machine.

As for repairs...
The payout mechanism was gummed up with old grease. It was completely disassembled, cleaned and re-lubed.
Edge connectors were cleaned
A few old Electrolytic Capacitors were changed on the Main board.


Dim or burnt lamps were changed. Replacement bulbs used are 2182. Although I find they run a bit hot. I do not keep the game on when not playing it as a precaution.

Everything inside was coated in nicotine. Balls would not release properly, coins would not even slide down the coin chute. Cleaned everything with 99% Isopropyl and Novus 2.

The machine is for Japanese domestic market, which means it runs on 100VAC instead of the North american 120VAC standard. A large ceramic resistor was installed somewhere in the machine's turbid past. Crude, but it works. Converting angry pixies into heat.


There is a switch at the bottom right of the cabinet. If the front door assembly is opened mid play, the game will not pay out winning combinations as an anti-tampering feature. 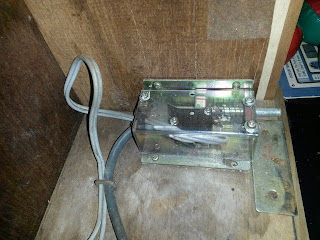 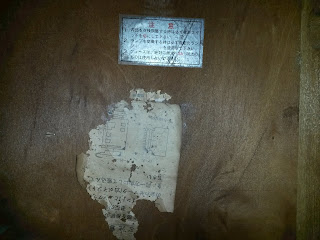 For a condensed history of Pachinko, check out Pachinko Boy's history page

I was playing it just the other night and I think YES it's the ultimate early bally bingo machine. Before all the magic lines, corners, squares, cards, screens, etc.

The Hold / Double Hold feature is mesmerizing in action. See all the odd or even balls drop through the playfiels at the touch of a button.

Combined with the Super card(s) and the 15, 14 or 9 spotted number feature it's a scoring powerhouse.

Just don't forget to press the yellow button before each coin you drop when betting for extra balls. (hint)

A detailed explanation of the gameplay and repair journey can be found here... I wrote this up a long time ago.

The Super Line and Corner scoring are a bit useless IMO, but that doesnt matter. Cool features nonetheless.

I like Surf-Club so much I have two of them. I use the second Surf-Club to bring to pinball shows. As seen here, here and here I think it's a very good example for a bingo machine and it's relatively compact and lite to move around compared to later bingo machines.

The Surf-Club pictured here is / was my second bingo machine ever. The first being Super Wall Street (Bali). Bought it non working. Brought it back to life.
This actual machine was operated locally back in the day. For this reason, I will never sell it. The machine is patinated and battle scarred but that doesnt matter. When you drop a coin in it's a carnival!

What do you think of Surf-Club?

pindude152
Gatineau, QC, Canada
I like to collect and repair Pinball machines. I bought my first pinball machine at the age of 17. I've been collecting and repairing for over 15 years. I've been on countless road trips chasing the odd pinball machine. I've driven countless miles to fix vintage games. My favorite kind of coin operated amusement machine is called a Bingo machine. Electromechanical (EM) bingo machines were produced between the early 50's and late 70's. They are considered to be the most complex electro mechanical amusement device ever produced. I got my first bingo machine in early 2013. I take great pleasure in repairing them. I decided to start my own blog on my bingo and pinball adventures after writing a few years on various forums but became gradually disenchanted with the medium. I love to write about everything that has to do with vintage EM amusement machines, I had to find an outlet, so here goes.